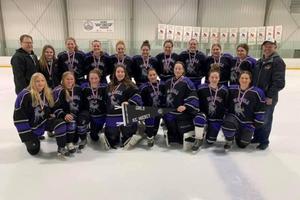 The girls hockey team won Huron Perth Championship and will move onto WOSSAA at the North Huron Wescast Community Center March 10th! Read the story here!
The Girls Hockey Team travelled to Stratford on Monday February 24th to play CHSS of Clinton, in the semi-finals of Huron Perth.  The girls were successful coming away with a 3-0 victory.  This set up a Championship game with St. Mikes of Stratford, who were undefeated this season.  The teams were very evenly matched and it was not until the second period when Madill opened the scoring on a screened point shot.  This goal seemed to give the girls an extra step and they started to take the play to St. Mikes.  Madill added 2 more making the score 3-0 Madill, before the end of the second period.  St. Mikes came out flying to start the period and scored just over 3 minutes into the third period.  The girls dug deep and played excellent team defence frustrating the talented St. Mikes team.  Final score 3-1 for Madill.  This is the first time since 2010 that the Girls Hockey Team has captured the Huron Perth Championship.  Madill now hosts WOSSAA on March 10.  Congratulations and good luck girls.